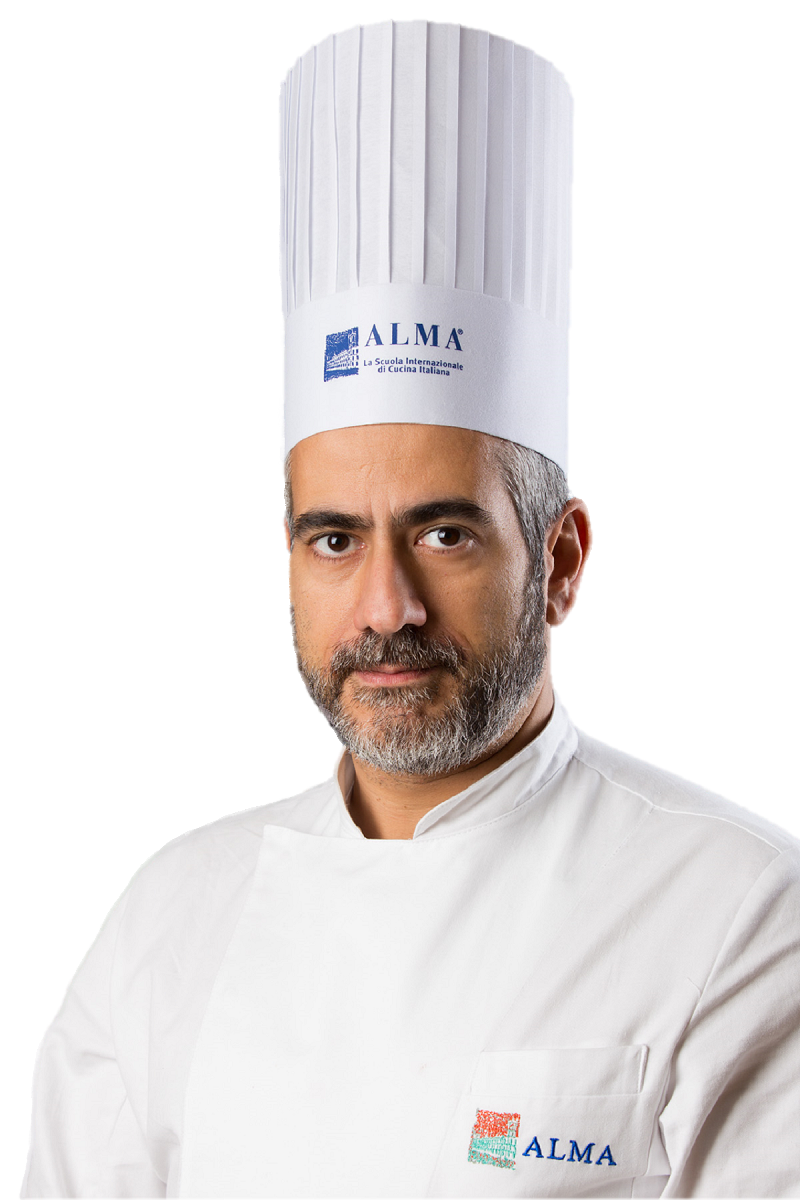 Born in Rome in 1976, and a citizen of Palermo by adoption, he watched his grandma and mother cook, whilst he studied mostly science subjects to become an engineer, a profession that he carried out for 12 years. Then he found in Gastronomy and Cooking the answer to his future professional life: so in 2015 he was admitted to the ALMA Course in Basic Cooking Techniques and, afterwards, to the XXIX Edition of the Advanced Course in Italian Cuisine.

After the degree, he carried on his profession as consultant chef and in 2016-2017 he became part of the ALMA staff as a chef in charge of Events, whilst cooperating with the University of Parma in research activities in the field of Gastronomic Physics. Since 2018, he has been working as a Freelance Chef and he has been cooperating with ALMA, as well as with other important players and national and international brands.

After a period as a chef in charge of Events carrying out the first missions in Bosnia, Croatia and Turkey and, subsequently, in India, he became ALMA Ambassador with the belief that Italian cuisine and its values have social and cultural importance, in addition to those exquisitely associated to taste. Ethics, seasonality, tradition, respect, technique, history and culture: gastronomy is a form of communication and, as a matter of fact, probably one of the most intimate forms of communication.

His aim in the role of ambassador is  to safeguard, protect and spread with enthusiasm and respect the authentic Italian product and the way of cooking and enjoying food in Italy to regain sustainability, the wellbeing associated to consumption styles, awareness and responsibility. Italian gastronomy is the gastronomy of products, culture, traditions and conviviality more than of chefs.

Favourite dish to eat: Pasta! I adore it in all its expressions: dry, fresh, stuffed, with a sauce, in a soup or oven baked. If I have to choose only one recipe, I would say Norma.
Favourite dish to cook: Pasta, rice and risotto. The Italian first course. A concept category containing an infinite number of small worlds.
Cooking in 3 words: Something, someone, time.