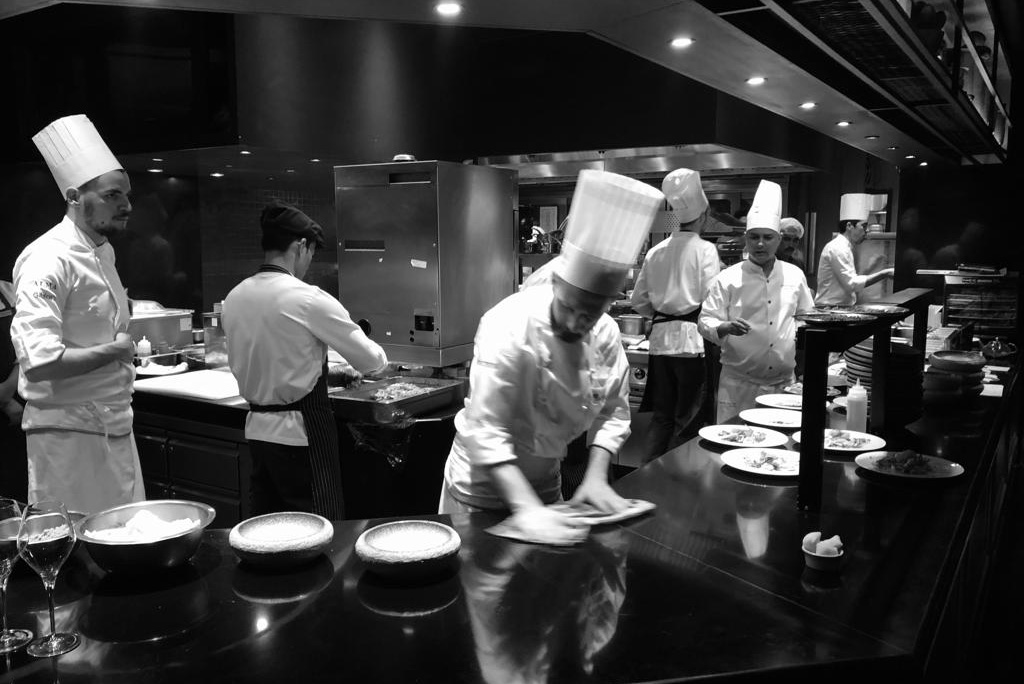 The third edition of the “Week of Italian Cuisine in the world” 2018, the event designed and coordinated by the General Direction for the Promotion of the Country System of the Ministry of Foreign Affairs and International Cooperation, with the aim of promoting abroad the Italian agri-food industry and quality cuisine, outstanding examples of the “Made-in-Italy Brand”, has come to a close.

Through its Ambassador Chefs and teaching staff, ALMA took an active part in the event’s numerous initiatives around the world. Lessons, cooking demonstrations and masterclasses open to the public, gala dinners, and written material in order to convey the universal culture of Italian Cuisine.

As part of the “Week of the Italian Way of Life”, ALMA’s Ambassador Chef Matteo Vigotti gave a masterclass entitled “Food for Serious Thought: Geographical Indications Day”, an event about the local origin of made-in-Italy products that took place at the Italian Embassy in Canberra.

In the Bosnian capital, ALMA’s Ambassador Chef Andrea Ruisi participated in a two-day event dedicated to the Italian culinary tradition, in collaboration with ICE Sarajevo, an agency for the promotion abroad and internationalization of Italian companies.

During the celebrations, Ambassador Chef Andrea Ruisi was a guest of “Konacno Petak” (Finally Friday), a program by the national TV network BHRT, in a segment presenting and promoting typical products of Italian cuisine.
Guarda il video

For the “Week of Italian Cuisine in the World”, an event promoted internationally by the Ministry of Foreign Affairs and International Cooperation, ALMA – the International School of Italian Cuisine – flew to Toronto, Canada, as guest of the George Brown College cooking school.
The Emilia Romagna delegation, led by Simona Caselli, Councillor for Agriculture, brought the Food Valley abroad in order to promote outstanding regional products and strengthen the protection of geographical indication products. It was a unique opportunity to present products of excellence from the Emilia-Romagna region in the ever-expanding Canadian market.

For this occasion ALMA, represented by Ambassador Chef Luca Marchini, who is at the helm of the one-Michelin-starred “L’Erba del Re” restaurant, and by Fabio Amadei, lecturer in history and culture of Italian gastronomy and culture, gave a cookery demonstration in the wonderful setting of the “Chef House” of George Brown College: a lesson dedicated to Italian cuisine and to the promotion of PDO and PGI products from the Emilia-Romagna region.

This event highlighted ALMA’s drive towards globalism and its ever more synergistic relationship with institutions. As stated by ALMA lecturer Fabio Amadei, “through this important cultural project, ALMA has succeeded once more in conveying to an international audience, keen to learn about the multi-faceted depth of Italian cuisine, the great passion for gastronomic culture that we consider an essential element of the training of the chefs of the future.” 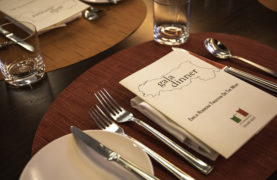 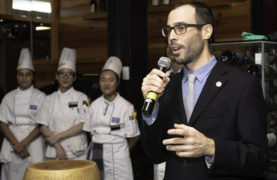 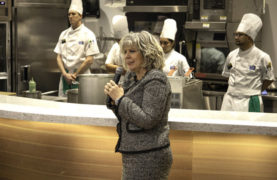 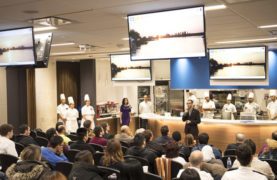 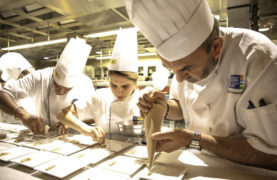 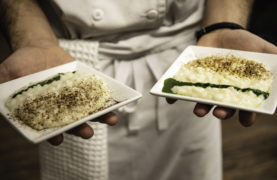 On the occasion of the “Week of Italian Cuisine in the World” in Sisak, Croatia, ALMA was a guest at Kul In – partner school of ALMA, the International School of Italian Cuisine -, in collaboration with the Italian Embassy in Zagreb. A cookery demonstration given by the ALMA Ambassador Chef Andrea Ruisi, dedicated to the tradition and values of Italian cuisine.

In Southern Asia, beyond the Himalayas, ALMA landed in New Delhi, capital of the Indian Republic.

On the occasion of the Week of Italian Cuisine in the World, ALMA was involved in different initiatives promoting Italian products of excellence. Gala dinners, masterclasses, workshop activities and press conferences involved the participation of the General Manager, Andrea Sinigaglia, ALMA chef Bruno Ruffini, and an entire ALMA kitchen brigade consisting of Dario Bringheli, Alessia Cordini, Alessandro di Laura, Sarah Leone, Davide Prestianni and Emanuele Sibilio, professionals in the sector and graduates of the school’s Advanced Courses in Cuisine and Pastry Techniques.

Davide Prestianni, Graduate of our school and, for this occasion, ALMA Ambassador Chef, has given this account of his experience:
“Outside Europe for the first time. I had imagined my first long-distance flight many times, fantasizing about Japan, the United States, or perhaps South America. I can honestly say I had never seriously considered India among my dreamed-of destinations: after a week in Delhi with what are my friends rather than colleagues from Alma, I am happy to say that I had made a huge mistake. It’s all too easy to judge and form hasty opinions about something you don’t really know anything about. It’s just as easy to complain, to varying degrees, about one’s own situation, whether at work or in one’s life.
I thought my university education prior to my cooking career would have at least prepared me psychologically for certain types of situations, but I was mistaken in this as well. The week I spent in India was an invaluable experience. It opened my mind about what can truly be defined as disadvantage and sadness, but also as genuine, sincere joy. I went through a seesaw of emotions.
The ostentation of the rich, beautiful, clean image of a huge luxury hotel clashed strongly with the beggars or the groups of barefoot children, with crumpled T-shirts and terribly sad eyes, that you could see as you crossed the same street. It was thrilling to get on every single tuc-tuc, holding on to the arms of colleagues met just a few hours earlier, shouting for fear that the vehicle would tip over in the countless near-misses in the constantly packed streets. It was wonderful to walk through the streets of Old Delhi and smell spicy aromas, or observe the haphazard system of electric wires and cables enveloping every roof. Wonderful to cross the threshold of a Sikh temple, barefoot and with head covered, to listen to the prayers being constantly recited or to watch the rite of purification in the vast body of water behind the elegant building decorated with gold. Also, the “canteen” within the temple, with its huge kitchens, where tourists as well have the opportunity of lending a hand and feeling part of this pulsating organism. Wonderful to taste local ingredients, spices seen only in pictures until then, to discover that the least spiced food in India, as far as I am concerned, is equivalent to the hottest and strongest I ever tasted in Italy, and something that I will always carry within me.
Finally, it’s impossible to quantify the connection and affection that I felt and continue to feel for the young men and women with whom I shared this experience. The quick camaraderie that developed between us and kept us in touch afterwards, with the promise of meeting again as soon as possible, is yet another great outcome of this experience. My only regret, probably, is having such a limited time over there and, above all, missing out on visiting iconic places such as the Taj Mahal and the other cities, near and far. Still, I can now use this as the best excuse for returning to a place that has captured my mind, and to a people that, regardless of their condition, never failed to smile at me.” 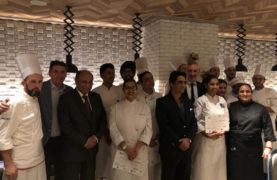 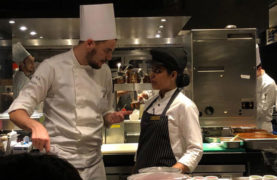 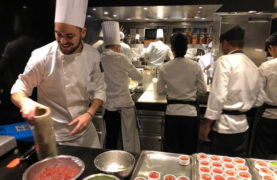 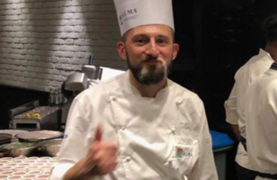 The presentation of “Mediterranean diet”, a recipe book made in collaboration with TINEX and ALMA, also took place in the Balkans, but this time in Skopje, Macedonia. This event promoting the culture and tradition of Italian Cuisine in the World was organized by the Italian Embassy in Skopje and by ITA – Italian Trade Agency in Skopje.

In collaboration with the Italian embassy in Yangon, ALMA visited Myanmar, for the “Week of Italian Cuisine in the World.” The ALMA Ambassador Chef Stefano Santo gave two masterclasses together with young and aspiring chefs from HCTA – Hospitality and Catering Training Academy, from MTHRD – Myanmar Tourism Human Resources Development and from the Olea Mediterranean restaurant in Meliá.
This was an opportunity for the students to learn new traditional Italian recipes and share the immense tradition of Italian cuisine.

In Lisbon, Portugal, ALMA represented Italy in the “Week of Italian Cuisine” 2018 with Ambassador Chef Pasquale Laera, chef of the one-Michelin-starred “La Rei” restaurant, who took part in a one-day training for Master’s students from ESHTE – Escola Superior de Hotelaria e Turismo do Estoril. A lesson about the different pasta shapes and the preparation of a traditional dish, spaghetti with bottarga and hazelnuts.

Naturally the “Week of Italian Cuisine in the World 2018” had make a stop in the African continent. The event, held in Dakar, Senegal’s capital on the far western coast of Africa, and organized in collaboration with the Italian Embassy in Dakar, featured Ambassador Chef Carlo Maria Ricci, who gave a masterclass on Italian cuisine at the “Ecole Nationale de Formation Hôtelière et Touristique de Dakar”.

As part of the initiatives for the “Week of Italian cuisine”, the second edition of the competition “Prepare your future. Young talents of Italian cuisine” was launched in Madrid, to select the most promising Spanish chefs wishing to specialize in Italian cuisine. The winners will be able to participate in the ALMA Advanced Training course “Italian Culinary Programme-Unit 2”, the course dedicated entirely to international students.
The event included the awards ceremony for the second edition of the competition for young sommeliers, organized by the Italian Embassy in Spain, in collaboration with the Italian Agency for Foreign Trade (ICE), the Chamber of Commerce and Italian Industry in Spain (CCIS), ALMA – the International School of Italian Cuisine, the Spanish Union of Sommeliers (UEC), and the Spanish Commerce Chamber in Madrid.
The three winners — Clara Zorita, Mateo García and Claudia Gozalbes, all from Madrid— were selected from among 58 competitors by a jury consisting of the Ambassador Stefano Sannino, the Coordinator of the ALMA Wine Academy Ciro Fontanesi, and UEC President Fernando Gurucharri. The winners won an Advanced Training sommelier course at ALMA.
At the end of the event, the ALMA Ambassador Chef Pino Cuttaia – at the helm of the starred La Madia di Licata restaurant – prepared a gala dinner.

On the occasion of the “Week of Italian Cuisine in the World” in Taiwan, the important agreement between ALMA and Hung Kuan University, ALMA’s partner school in Taichung, was signed.
This strategic alliance will ensure an ever stronger synergy between the two schools, and lead ALMA to play an increasingly essential role in the promotion of Italian Cuisine.
On this important occasion, Ciro Fontanesi, ALMA Wine Academy coordinator, participated in a three-day event entirely dedicated to the world of wine. 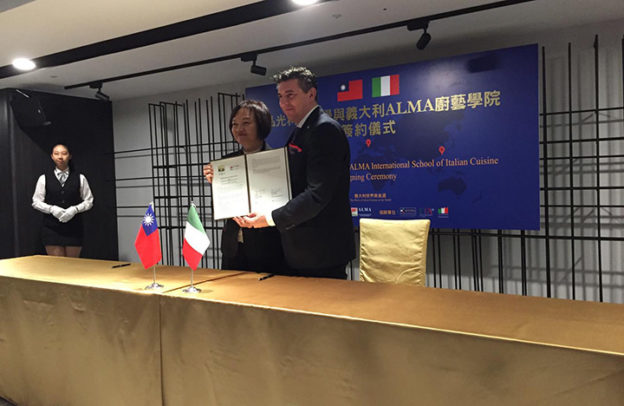 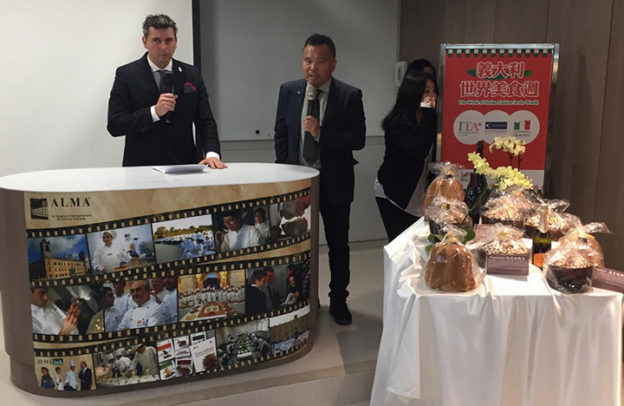 The Third Week of Italian Cuisine in the World 2018 was also celebrated in Turkey, at the headquarters of MSA, the renowned professional cooking school in Istanbul and official partner of ALMA – The International School of Cuisine.
The event, also promoted by ICE Istanbul, was an opportunity to highlight once more the extraordinary excellence of the Italian culinary tradition. For the occasion ALMA, represented by Ambassador Chef Andrea Ruisi, gave a five-day masterclass entirely dedicated to the centuries-old tradition of Italian fresh pasta. 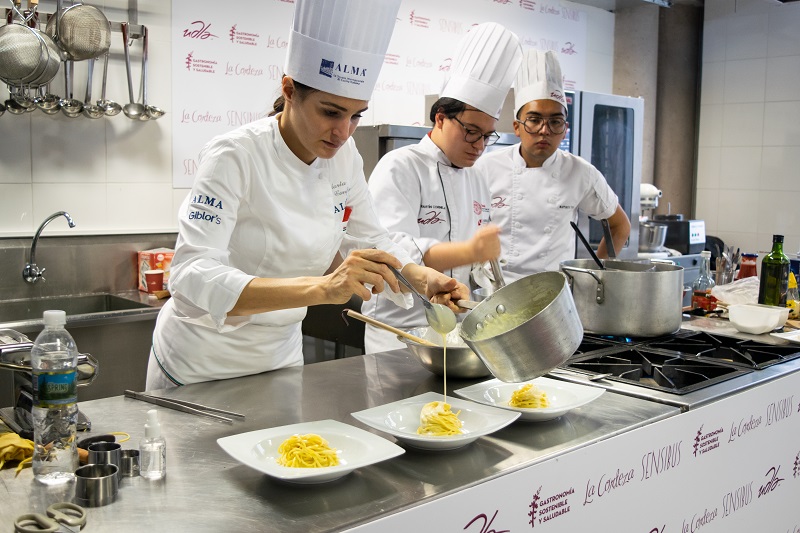 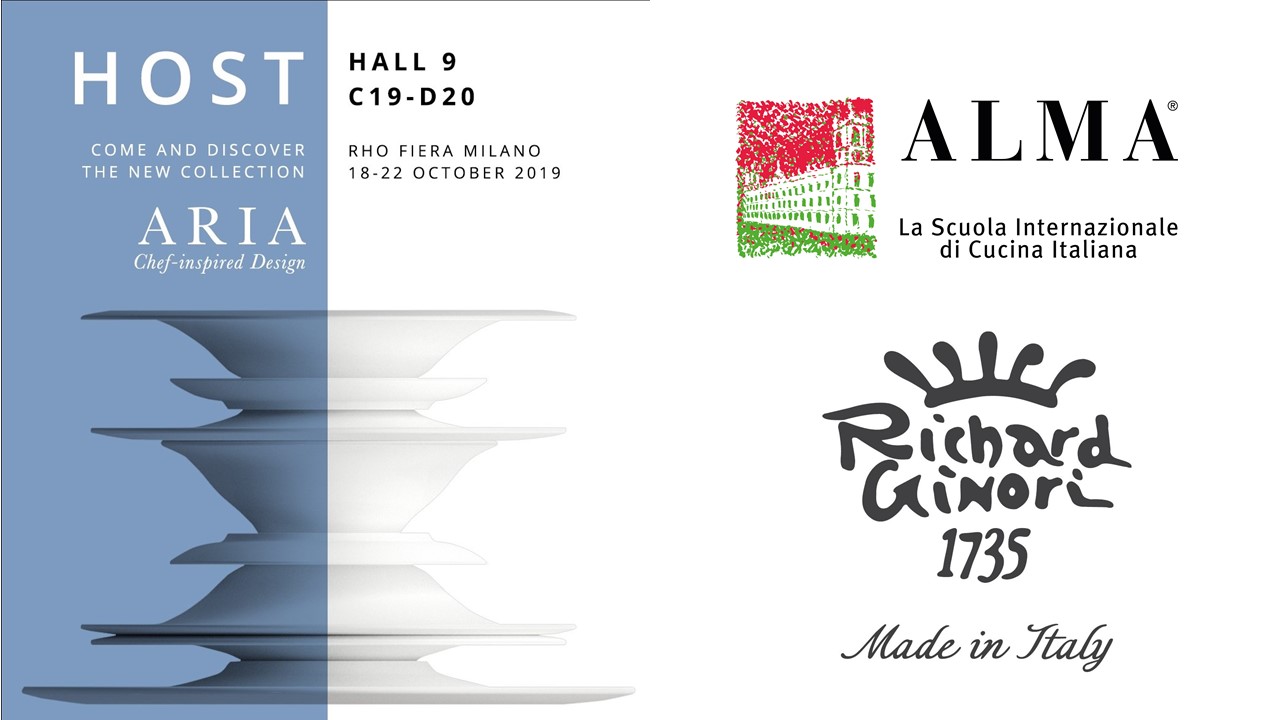 Richard Ginori, the maximum expression of Italian excellence in the artistic manufacture of pure porcelain since 1735, confirms its participation in the 41th edition ...
Read more 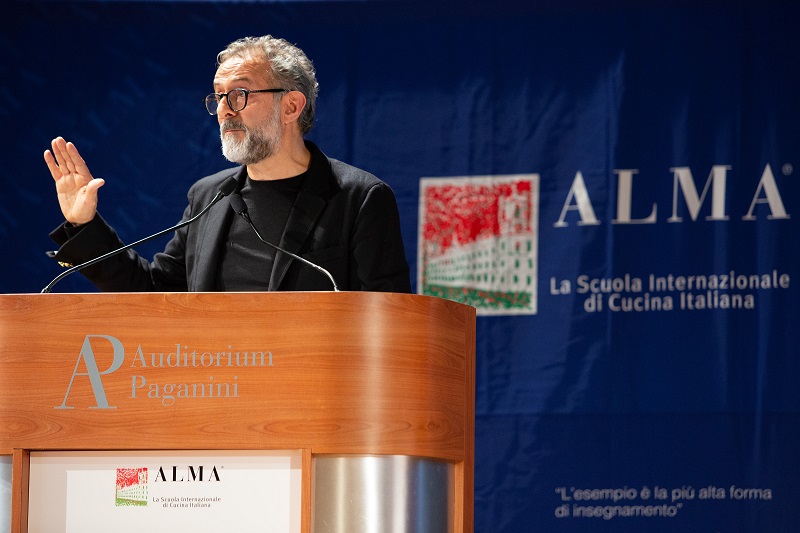 ALMA: A STEADY GROWTH   The management of the International School of Italian Cuisine ALMA announces important news at Auditorium Paganini in Parma before ...
Read more